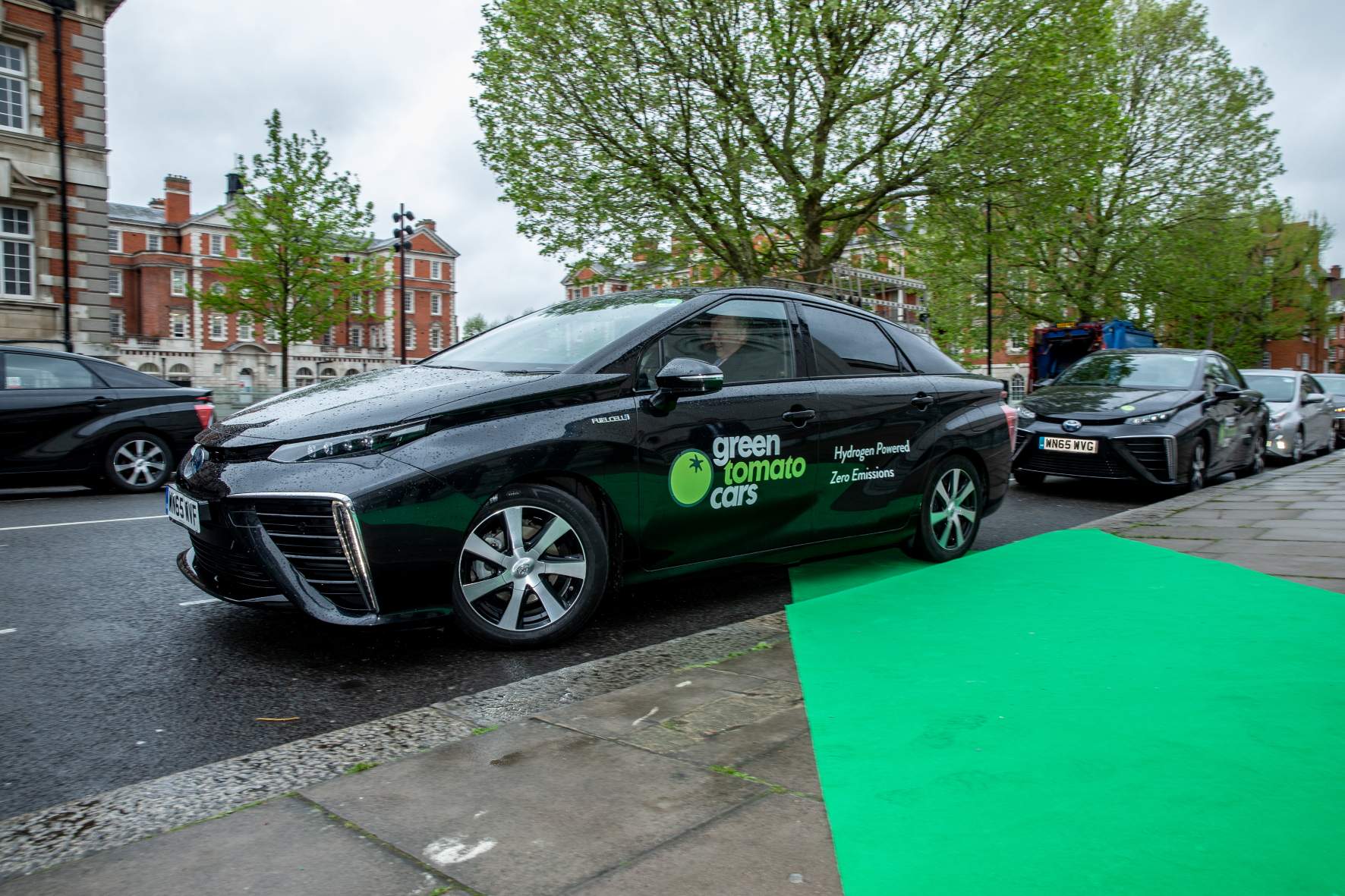 Not content with already having the largest number of low-emission cars of any private hire company in London, Green Tomato Cars are proud to announce the addition of 50 Toyota Mirai to the fleet. The move is part of a pan-European project to introduce fuel cell electric vehicles (FCEVs) into three different cities across the continent.

Known as Zero Emission Fleet vehicles for European Roll-out (ZEFER), the project is expected to cost around €26 million (£22.8 million) and will see 180 hydrogen-fuelled vehicles distributed to taxi firms, private hire companies and police authorities in London, Brussels and Paris.

An ingenious alternative to standard fossil-fuel engines, the Mirai runs on hydrogen. Stored in a carbon-fibre fuel tank inside the car, the hydrogen travels through to the fuel cell as and when it is needed, where it comes into contact with oxygen drawn in from the intake grilles on the front of the vehicle.

Anyone who was paying attention in high school chemistry will know that when hydrogen and oxygen interact, electricity is produced… which is used to power the car! And the best part of all is that the only by-product of this reaction isn’t a harmful gas or contaminant – it’s simply water. As such, the Toyota Mirai represents one of the most environmentally-friendly engines on the market.

Green Tomato Cars first added the Mirai to our fleet in June 2016. Now, we’re happy to be taking part in this exciting Europe-wide initiative to promote hydrogen-based technology in fuelling our vehicles and paving the way for a greener tomorrow.

“We’re very proud to have pioneered hydrogen-powered transport in London and are delighted with the performance of our two original Toyota Mirai.” remarked Jonny Goldstone, CEO of Green Tomato Cars. “This is a truly unique project where investors in hydrogen technology, manufacturers of hydrogen cars and Green Tomato Cars as the end-users, have come together with a commitment to make hydrogen transport work for the good of the people and the environment.”

The first of many journeys

The Secretary of State for Transport Chris Grayling was the first person to test-drive the new car at the beginning of May. “I was thoroughly impressed by the Toyota Mirai today and was delighted to be the first passenger in one of Green Tomato Cars’ new zero-emission vehicles,” he commented after making a short trip near Westminster. “Improvements in hydrogen infrastructure over the last year and the developing partnerships between the hydrogen power providers, manufacturers of hydrogen vehicles and end users, are helping accelerate the decarbonisation of road transport.”

The first 25 Mirai have already entered the Green Tomato Car fleet and have been allocated for all standard bookings and premium “Black Car” services. The remaining 25 vehicles are due to join them in September of this year.